Hello and welcome to my wonderful new series all about the stupid nonsense that gets posted on the internet and joining me trying to understand how this makes news headlines.

As I trawl through endless social media with news stories popping up, you sometimes find one that really tickles you in the good spot because its just so darn ridiculous and you wonder who’s getting paid to source these and why isn’t this my job.

This may sounds boring but please stay here and let me share some things that if you’ve been having a crap day may just put a smile on your face and realise to look at the bigger picture… Which will be seagulls today.

So onto the first story which some may have read on BBC News:

Hold your pepperoni for this one as it may well just get nabbed.

A Canadian man has been “pardoned” by a luxury hotel after his room was ransacked by a flock of pepperoni-loving seagulls nearly two decades ago.

In 2001 a gentleman bought some pepperoni and decided to let it cool down after a hot day by placing it on his windowsill of his hotel.

After spreading out his beloved pepperoni he decides to go for a walk for around 4 hours which in the highlight of things was really a bad idea.

This led to him arriving back later and walking into his room facing around 40 seagulls who have just demolished the entirety of his pepperoni which he quotes “does NASTY things to a seagull’s digestive system” so if you’re not squeamish just picture this lush hotel room now bombarded with 40 seagulls all having some spicy shits. 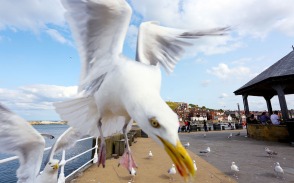 After increasing the birds agitation by wading through to open all the windows and in his confused state, he managed to TAKE OFF HIS SHOE TO LOB AT ONE OF THE SEAGULLS (I’m crying with laughter that this was his first thought at self defence) who was trying to get back in. The shoe and seagull both went out of sight through the window. This happened a second time but included a bath towel and one remaining seagull still munching on the remaining pepperoni. The same ending happened.

When the housekeeper arrived late this was his only reply: “I had absolutely no idea what to tell her, so I just said ‘I’m sorry’ and I went to dinner.”

After 17 years the hotel granted his reprobate behaviour as “time served” and raised the ban.

This is all about one special seagull named Gulliver from the island of Jersey. (Because lets be honest i’m born in Jersey and there’s NOTHING to put in the news there, so a dive bombing seagull will have to do).

And so it did. After the bird attacking over 800 individuals it has now been classed as a dangerous animal on the island and ruining a newly married couples wedding photos, it has now been threatened to be killed.

People in Africa deal with lions, tigers, rhino’s and buffalo’s but Jersey can’t hack a single frigging seagull?… And to think I was born there…

It was meant to be moved 15km to the Les Minquiers in a hope to stop attacking the humans but after some debate the end result came to killing it as the only reasonable solution (sarcasm here).

‘The birds absolutely stink of alcohol when we collect them, so now our vans smell like pub’ -RSPCA

Yes, not only have seagulls been stealing our food for generations they are now moving on to bigger fish to fry. ALCOHOL.

watching the seagulls who have drained their resources of beer; not able to walk in a straight line down the road to their partners at home sitting on the nest.

RSPCA have said the birds are acting the same as we humans do after too few tipple walking in a confused circle and squawking randomly hoping someone helps us get back home.

Unfortunately alcohol poisoning claimed a few with a quote from a veterinarian “Sadly, a few of the birds have died, but most of them have made good recoveries and have been released after a few days in our care.”

So hopefully with rehab helping the birds to not steal alcohol from the back of breweries anymore, down south should be back to normal soon.

And that’s it for this lot of Ridiculous News Stories, I hope you enjoyed it as much as I did trying to find these and trust me these weren’t the only ones that stood out based on bloody seagulls.

So if this is something you enjoyed please give this post a like so I know to write more like this as I honestly really enjoyed getting back into my silly stupid writing and would really love to do more.

View all posts by strawberrytravelsblog

My name is Ella, my middle name is Strawberry.

I am 19 years old, the stage in life where everything seems so serious with making decisions to sort your life to know which directions you’re heading. I don’t know my direction.
So, here we are with the start of my blog. I hope you enjoy.